How many of you have been tempted to buy or have bought ‘the deal of the century’? Only to find out later that your item is faulty or poorly made? We had this situation happen to a client of ours.

Her fiance ordered a bridal set from another country, getting what he believed was a great deal. When it arrived in Australia our client – we’ll call her Mary – was disappointed by a poorly made engagement ring which also was not to her taste. She wanted fine and delicate but she got heavy and chunky. This look did not do anything for the diamond or for her.

So Mary bought the ring to us, very upset, asking what we could do to help them. Upon taking a close look at the ring our initial thoughts were that it was poorly made and we didn’t want to touch it in case anything else went wrong. We suggested she get in touch with the original jeweller, however, it was no shock to us to hear that they would not co-operate.

After some discussion, we agreed to try and make it look more delicate and resize it up a size for her. As we attempted to resize the ring, something dreadful happened. It cracked in at least 5 places. This should not happen and is the result of a poor cast. We contacted our client and discussed her options with her as we could not fix these cracks for fear that more would appear.

Overall Mary was happy with our service but she went through a lot of unnecessary upsets to get to that point.

Pictures are of the cracked original and new engagement ring! 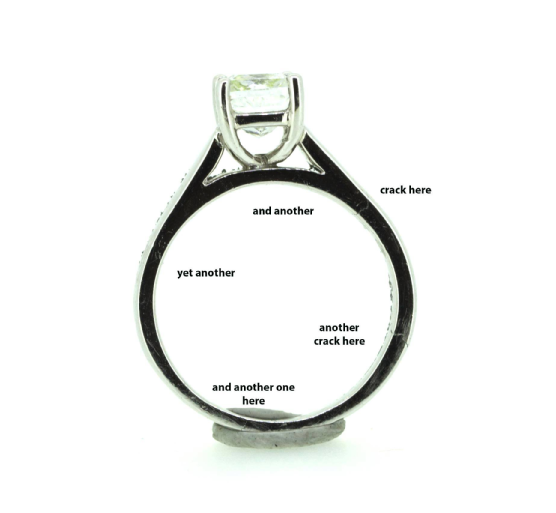 So there are a couple of lessons to be learned here which is why we are sharing this story with you.

1. You get what you pay for. You may think it’s the best deal ever but trust that something has to be compromised to get to this price. In this case it was the craftsmanship.

2. Buying something from a country you aren’t living in can be risky. You don’t get to see the finished product before paying for it for starters. It may also prove difficult to do any repairs, you can’t just take it drop it back in. Also, different countries use different manufacturing methods and different metal alloys which can be a challenge for your local jeweller.

Have you had any similar experiences? We’d be interested to hear them.

About the Author: Clayfield Jewellery